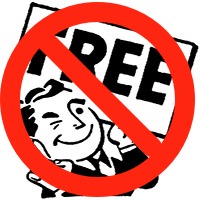 Reports of kids racking up huge bills through in-app purchases (IAP) is certainly en vogue in the mainstream media at the moment. The tech media, too. When the story ingredients include young children, the (on occasion) largest company on the planet and mammoth credit card bills for normal, hardworking parents then you’re guaranteed eyes on the page. The conclusion being that Apple is, after all, evil.

For tech-heads like us, immersed in this technology every day, it’s easy to blame the parents. It’s wrong to do so, though — it’s just too convenient.

Parents are not dumb…they’re simply not aware that entering their password will give little Billy a 15-minute supermarket sweep.

Parents are not dumb. Yes, they’re busy but that does not make them stupid. They’re simply not aware that entering their password will give little Billy a 15-minute supermarket sweep. They’re not aware that IAPs are enabled by default and they’re certainly not aware that they can disable that thing (that they didn’t know about) that was already enabled.

Nor, as the tabloids might have it, is it Apple’s fault.

In-app purchases accounted for 53% of US iPhone App Store revenue in January 2012. This rose to a whopping 76% a little over a year later. The cynic might argue that there is little incentive for Apple to restrict such a lucrative revenue stream.

Apple does a fantastic job of making complex technology simple to use, but it remains complex technology — often with lots of different options. To you and I, it’s easy enough to use, but for Apple’s ever-increasing iOS-device owning customer base, there is perhaps less familiarisation with the vagaries and eccentricities of Apple’s mobile operating system.

The fact is that Apple does allow the disabling of IAP from iOS devices. The problem stems from the facts that Apple:

Given that the possibilty exists, Apple needs to examine how it can strike the right balance between the “frictionless” ease-of-use experience, for which it is famed, and the protection of consumers such that they do not become unwilling victims of a credit card bill shock.

On this occasion, Apple’s frictionless approach has been a little too frictionless.
Apple still has a job to do in educating people regarding in-app purchases and they’ve refunded some for big bills but this is a drop in the ocean. Apple has responsibility for preventing these crazy bills occurring in the first instance. Indeed, they’ve already started by identifying apps, in the App Store, that use IAP.

Perhaps — in the next iteration of iOS — disabling IAP by default, reducing or removing the default 15 minute password window, limiting the permitted spend on apps per day would be welcomed by parents who don’t yet know they need this protection?

No right-minded parent knowingly gives a five-year-old a credit card in a toy shop. The present system needs refining and, whilst it makes for good copy, it’s not the fault of the parents and I don’t think it is the fault of Apple, either.